The Livery Link Showcase Event, sponsored by the City of London Corporation,  takes place each year at Guildhall.  Following on from last year’s Showcase attended by over 1000 pupils during the day from across London, groups of up to 30 students attend sessions where City Livery Companies showcase the wide cross-section of industries, trades and professions they represent.

This is always a dynamic and vibrant event aimed to signpost students to a broad range of career paths and job opportunities across many disciplines which appeal to students of all abilities and ambitions. and the Horners are represented with a stand.

The Showcase this year was in a different format, running over two days and involving primary as well as secondary schools. There was also a change of focus, with increased emphasis on careers advice. So our stand  took the form of some “pulley-uppies” thanks to the Renter Warden, a looping PowerPoint presentation illustrating a variety of industries which use or generate plastics and a number of applications of polymers which Barry Maunders created, a version of the Science Opens Doors leaflets that Clive Thompson edited for this audience,  and on the table a display comparing and contrasting a variety of paired objects where plastic has superseded other materials. Our twin aims were to show the advantages of polymers when sympathetically used and the importance of studying STEM subjects in keeping open a wide range of careers.

In previous years the Showcase has been held in February/March but this year it was 18th/19th June. We had some doubts about the change given the examination timetable, but the LSL team informed us that they had surveyed London schools, receiving positive responses.

On both days many schools brought students – a steady stream passed through the rooms of the Guildhall and a number stopped at our stand. On the primary day two noise-generating horns attracted much interest from the visitors, and some attention from neighbouring stands. We thought it better to remove them for the secondary day! Students who stopped at the stand showed a keen interest in the comparative display, seeing advantages of the plastic items such as in replacing cast iron guttering but were also focussed on methods of disposal/recycling at the end of the useful life.

The two-day event needed Horners to man it and  Barry Maunders, Clive Thompson, Mike Birrell, the Master, David Williams, Caroline and Gordon Haines, Liga Thrower, Mike O’Brien, Robin Kent and Rebecca Joyce all represented us. Contributing to this Showcase takes much time from company members , and we are most grateful to these Horners who gave up their time to man the stand. 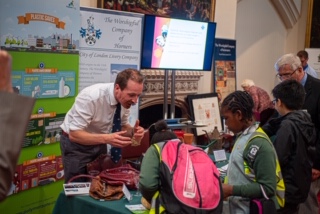 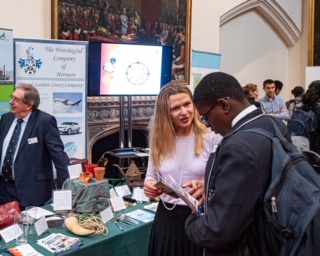 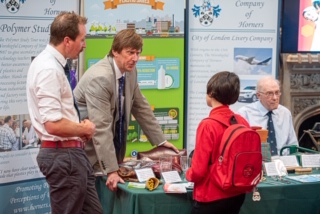 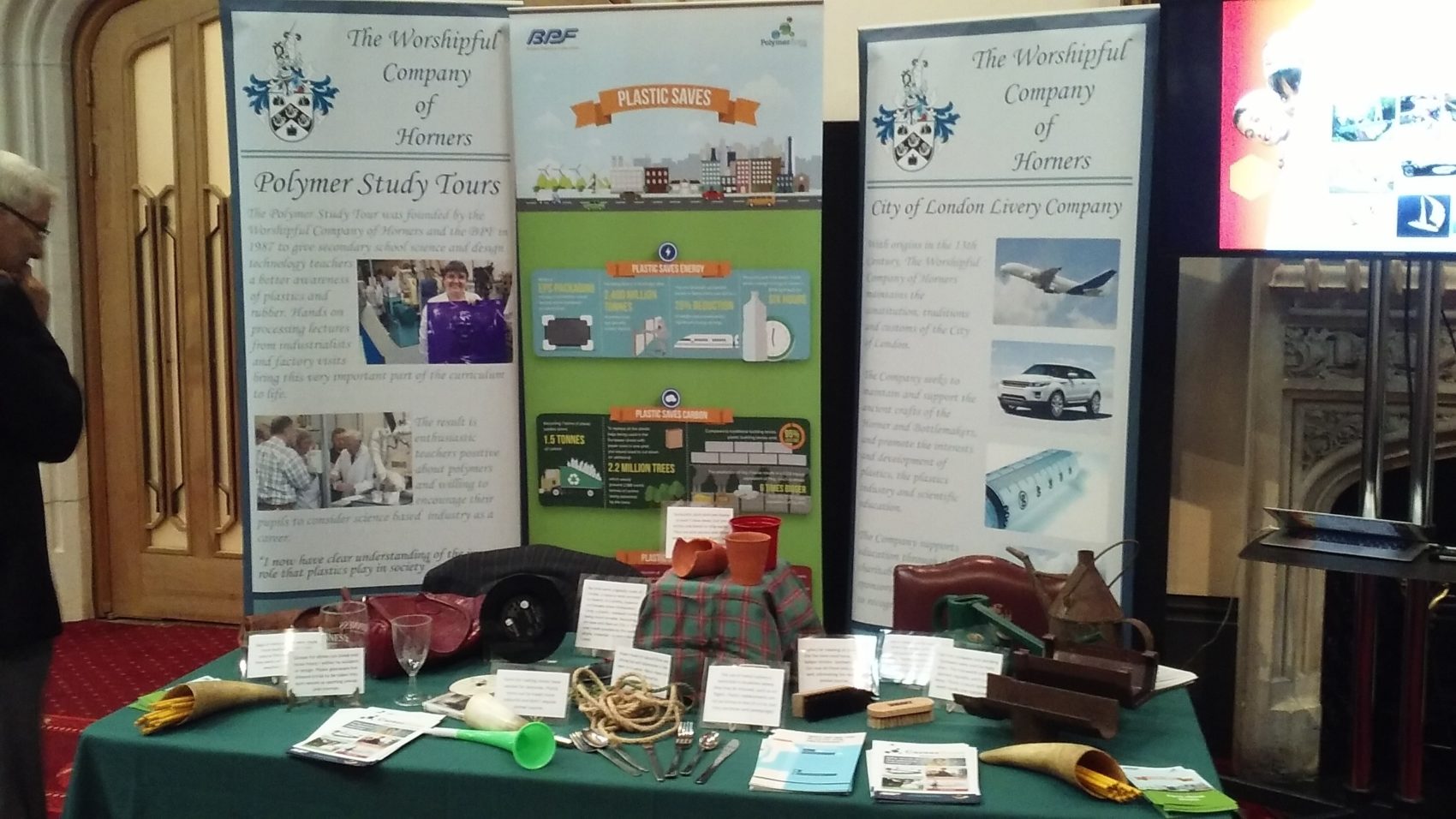 Horners continue to support SHAP though at a lower level than in previous years.

We make awards to the top students in the SHAP A Level examinations and this year these were presented by the Master to three of the six winners at an event in the Salters Hall on 19 December.

There is more information and details about the winners here.

This note by the Polymer Committee is to brief Horners who are on the periphery of the industry on the issues surrounding the debate about plastic waste in the environment.

Plastic has become essential and ubiquitous to our modern lifestyle because in product applications from medicine to digital devices it is more cost-effective, lighter and stronger than alternative materials. A recent paper estimates that to date we have produced 8300 million metric tonnes (Mt) of virgin material and production continues to increase. Currently most plastic is produced using oil or gas as the raw material but less than 10% of the world’s crude oil production goes into chemicals manufacture and plastics account for about half of this. In terms of emissions contributing to climate change plastic manufacture is a very small component and the product itself locks up carbon in a stable and inert form.

It is this stability which makes plastic a potential environmental issue since on disposal it breaks down only slowly. Of the total amount of plastic produced it is estimated that approximately 6300 Mt of waste have been generated of which 9% has been recycled, 12% incinerated and the remaining 79% accumulated in the environment mostly in landfill. In the last 10 years however recycle rates in Europe have increased by almost 80% and continue to do so. In 2016 31.1% of collected post consumer waste was recycled, 41.6% incinerated with energy recovery and only 27.3% went to landfill.

The issue of plastic pollution in the marine environment highlighted in the Blue Planet II film mainly arises from uncollected single use plastic packaging. The vast majority of this material flows from 10 rivers, 6 in Asia and 4 in Africa and the sub-continent in countries which have minimal systems for collecting and treating waste from any source. Less than 2% of marine waste comes from Europe and in the main this arises from “on-the-go” throw away litter. Other sources of marine pollution such as farm effluent and heavy metals from industrial activity are much more environmentally damaging but not so visible as floating plastic.

In the UK a number of steps have been or are being taken to address plastic packaging waste. Charging for plastic bags has reduced the number used by 85% and a deposit scheme for bottles is being developed. Supermarkets have agreed to review their packaging requirements and some have set targets for reductions in plastic use. Any change must be viewed from a holistic life cycle perspective since for example a cotton tote bag has to be used 150 times before it is comparable on a climate change measure to a single use plastic bag and a glass bottle used 50 times before it compares to its plastic alternative.

By Stuart Patrick FIMMM MRSC is Interim Chair of the IOM3 Polymer Society Board, a member of the IOM3 Sustainable Development Group and a Horner.

British Plastics Federation article in The Engineer on Plastic Waste

The Economist article on Plastic Pollution.

The Polymer Apprentice Award is run by the Horners Polymer Committee in collaboration with the British Plastics Federation.

The three Polymer Study Tours run this year at Napier, Manchester and London Met were a great success following last year’s rather disappointing teacher numbers. The Horners contribute £10,000 each year to the cost of the Tours which together with the money from sponsors covers all the running costs. We are also indebted to the administrative support we receive from IoM3.

Comments from the teachers are always complimentary and give confidence in the continued relevance and benefits of the Tours.

There is more information here

The programme aimed at introducing pupils, teachers and parents to the opportunities arising from studying STEM subjects has visited 10 schools in 2016 with 3 more scheduled in the new year which will bring to 40 the total of schools visited since the programme commenced. The Tallow Chandlers and Paviors have again added financial support and 3 of the schools they support have been included in the programme.

Seeking to expand the programme beyond London the Horners have funded a pilot programme of school visits to 3 primary schools in Lincolnshire, undertaken by the Centre for Industry Education Collaboration (CIEC) part of the University of York, which will be completed in early 2017 and will confirm how the expansion plans will be implemented

More details can be found here.

Following the success of the CREST Star activities in British Science Week and the follow-up competitions over the last 3 years it was agreed with the BSA that with no new CREST Star activity planned there was a better opportunity to sponsor a polymer / plastics competition in the science quiz. The quiz is set for different age groups and a “Plastics and Science” round was included in 2017 with 10 questions – 9 multiple choice and an open question to help choose the final winners. This was successfully run.

Discussions took place with the BSA to develop ideas for continuing Horners involvement in their activities. As a result the Horners sponsored a project in BSA’s 2017 Demo Day which was an annual campaign during British Science Week (10 – 19 March 2017) that aimed to inspire secondary school teachers and technicians to explore new concepts, provoke discussions and generate excitement through running science demonstrations. The Horners’ project was for the first time,  targeted at primary schools and as such supported our Science Opens Doors activities.

There is more information here.

Support to IoM3 – The Institute of Materials Minerals and Mining.

Horners supported the IoM3s“Biomaterials: Bionic man fact or fiction” one day conference which was an excellent programme with polymers taking a high profile. Material from the presentations was sent to PST delegates.