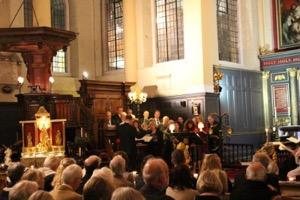 The Horners are, we believe, the only Livery Company with its own choir. Its gestation began in 1985 at the Election Service of that year, when Court Assistant (now Past-Master Emeritus) Jeremy Cartwright sang alone in the organ loft of St. James Garlickhythe. Now, under the baton of Court Assistant Charles Bettinson, the Horners’ Choir, drawn from the ranks of Freemen, Liverymen and Court Assistants, and including several Past-Masters of the Company sing for the congregation at the Annual Carol Service, and at the Election service in February held in The Church of St James Garlickhyth each year.