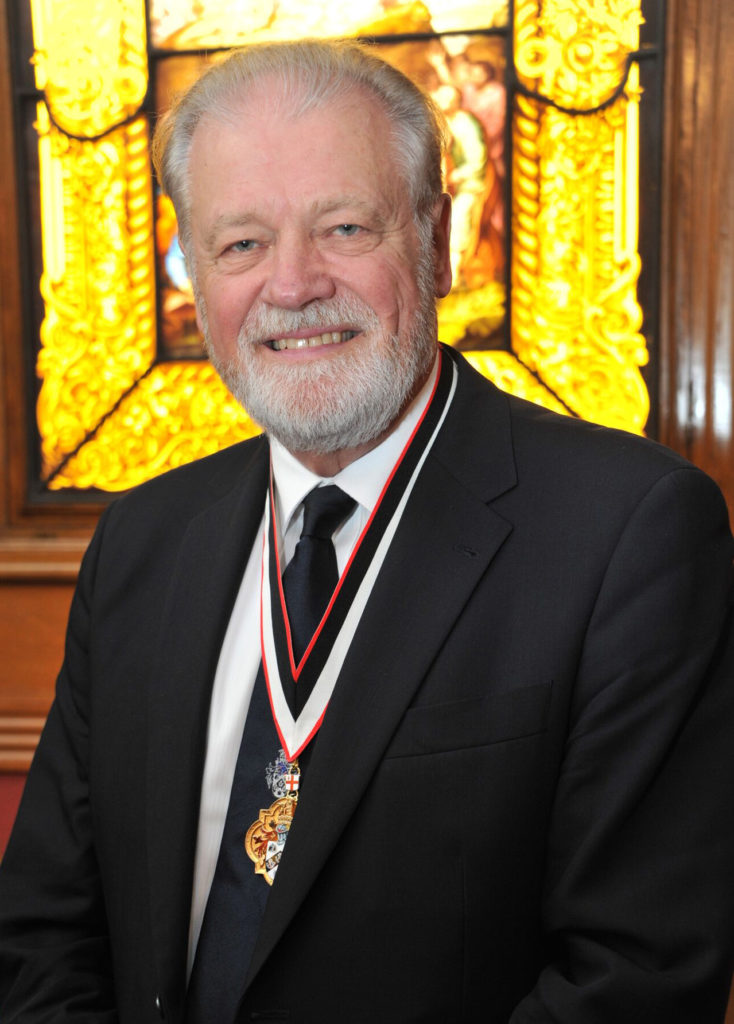 It is with great sadness that we have to record the sudden passing of Past Master David Williams on Wednesday 16th December, the morning of the December meeting of the Court.

David joined the Livery in May 1989 and was Master in 2011. He was also a Past President of the British Plastics Federation and of the European Plastics Converters Association. He served on the Board of 24 companies and was a great influence in the plastics industry. He was noted as someone who was always supportive and helpful and was highly respected by all who were privileged to know him.

Many Horners will know that David was a very fit person and indeed raised large sums of money for charity by cycling, for example, in the Cape Town Cycle Tour in March of this year.  He was also a keen golfer.

At the Court, Assistant Clive Thompson, a close friend of David’s gave the following Eulogy:

“Master, Wardens, Members of the Court

I wish that this day had not dawned

To find that David Williams, would no longer grace this Court, this Company, this planet.

I say this as a colleague, a Horner, and as a special friend.

We had many things in common, some of which I will recount to you

When I was a senior manager for BP in South Wales, David was growing up in the village of Sully, a few hundred yards away, and his convalescent period in hospital following his childhood polio was spent over the fence in Sully Hospital.

He went to Penarth Grammar School, and always the action man, left with A levels to join the Plastics Industry with E K Cole in Essex. There he rapidly moved from apprentice to management ranks, so that “ECHO PLASTICS“ sent him to what is now South Bank University where he qualified in Plastics Engineering. His status in the industry grew and he sat on many industry committees, including the one that set the British Standard for plastic toilet seats!

But his greatest prize from his time in Essex was in finding his beloved wife Jane!

Leaving ECHO he made the move to Linpac, who he helped make into the UK’s biggest independent plastics fabricator. This meant several moves around the country before he settled in Cheshire. His strong association with Linpac meant that he WAS Linpac. His standing in the Industry grew and he held several prestigious positions; He followed David Beynon as president of BPF – younger of course! He turned EUPC [European Plastics Converters] from an ineffectual talking shop into a really efficient effective organisation.

Then when the owner of Linpac decided to sell/break up the Company David was a lead negotiator in the sale, and maintained many industry contacts setting up Ventures in the UK and South Africa. He never stopped working and never ceased his connections with his cherished Plastics Industry.

David and I were admitted to the Horners on the same day in May 1989. As we were then both working, it took time for us to be fully active in the Company.

But since his retirement he has been a major force in this Company, devoting the same energy to us as he did to his commercial companies. He has chaired the Polymer Committee, set up the Communications Committee, chaired the Heritage Committee and latterly led the Education Charity Committee. He was a memorable Master, ably supported by Jane, giving us a superb visit to Berlin.

David was a giant of this Company, and not many of us can say that! His presence was always felt, his contributions to debate always weighty and pertinent and his quips could be uproariously funny and always apt. He was a life force in this Court.  Additionally, he was an asset to every Master with his charity cycle rides.

On a personal basis I shared many activities with David. We are both proud Welshmen and a great memory was sitting together at Twickenham to witness Wales beat England in the 2013 World Cup. The Welsh association spread into the “Suspender Party” set up by Charles Howe where 10 of us spent weekends away in Wales celebrating the AGM of the Suspender Party. Those memories will now be even more cherished.

David’s passing will reverberate in USA, South Africa and Europe, but never more than with Jane in Cheshire, his daughters in Zurich and California and his son in Frodsham, Cheshire, and their families. We send them our heartfelt condolences, assuring them of our support.

This Company now has the difficult task of coming to terms with loss of one of our leaders, of filling an unfillable chasm and adjusting our own worlds to the absence of such a valuable colleague Horner and friend.”