Another successful season for the Horners’ golfing fraternity, with 23 members and numerous guests participating in 20 fixtures including our Spring and Autumn meetings, matches against other Livery Companies (Tin Plate Workers, Actuaries and Barber-Surgeons), participation in our own inter-Livery tournament (The Horners’ Trophy), other Company golf tournaments (Marketors’, Loriners’, Tallow Chandlers’, Airline Pilots’ & Navigators’, Fuellers’ and Carmen), special Livery events such as Prince Arthur Cup at Walton Heath, the Lord Mayor’s Charity Golf Day, City Livery Club Golf Day and the Pewterers’ Challenge. We also managed three events with guests from our associated RAF Squadron, and a golfing holiday for 18 of us (including partners) on the Costa del Sol, hosted by Hon Court Assistant Simon Baldwin-Purry, where we played three rounds of golf including our annual match against the local PROBUS Club. 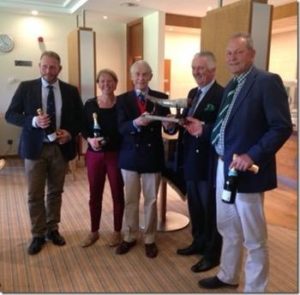 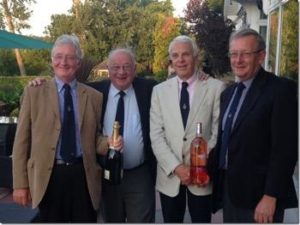 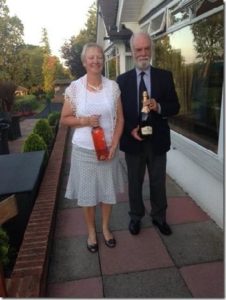 Highlights of the year were:

• The successful 13th Annual Horners’ Trophy event held at Ashridge Golf Club (the home course of legendary three-times Open Champion Sir Henry Cotton), again expertly organised by Colin & Andy Freedman, who have raised involvement such that 14 Livery Companies participated this year, which allowed us to have a “Shotgun Start”. The Master presented the winning team from the Fruiterers’ with the magnificent Trophy (donated by Liveryman Glenn Beall).

• Wins for HGS in matches, both at Porters Park, against the Tin Plate Workers’ and the Barbers’ (both by the narrowest of margins!).

• Participation of two HGS teams in the Lord Mayor’s Charity Golf Day at Stoke Park, and prizes to the HGS/City Livery Club team captained by City Livery Club President, John MacCabe (supported by Past Masters Colin Richards, David Williams and Jack Bunyer), for the best front-nine. This event next year will be organised by HGS at Burhill Golf Club on Monday 17th July 2017.

• Successful well-attended Spring and Autumn meetings. The first at Swinley Forest where the Thomas A Crompton Cup was retained by Maggie Bradbury with 36 points off a handicap of 10, which just beat Philip Marchant and Alan Price. In the afternoon Greensomes event, Jack Bunyer & Philip Marchant just outscored the Bradburys and the Young Guns from 27 SQN RAF, to win the EKCO trophy.

The Autumn meeting was again organised by Philip Marchant, and held at “the best course in Essex”, Thorndon Park. The relocation of this event to north of the Thames seems to have appeased our members from that region, and provided for a good attendance. We even managed to persuade the Renter Warden to join us for the afternoon Greensome, which will hopefully encourage him to participate more next year. The morning event for the “Horn Trophy” was won by occasional golfer Nick Horner with 34pts off HCP18, closely followed by Maggie Bradbury and yours truly with 33pts. Helen Giachardi won the high handicap prize. The afternoon 9-hole Greensome event was won by Maggie, partnered by guest Ravi Shanker. 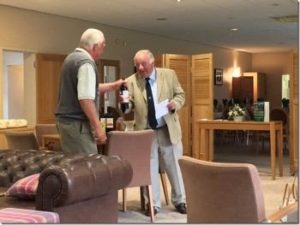 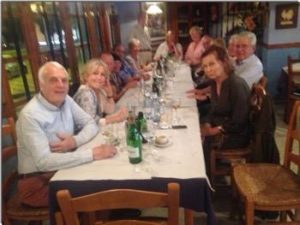 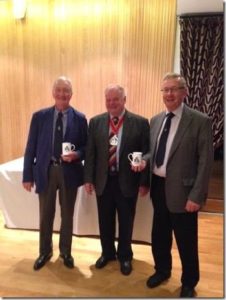 • Highest placed guest Livery Company team (Jack Bunyer, Anthony McLelland and Alan Price) in the Fuellers Golf Day at Windlesham. The picture is of Jack And Alan receiving their prize.

• The annual holiday to Costa del Sol resulted in a 2-2 draw for the Holiday Trophy presented by Simon for our match against the local PROBUS club, with Mike O’Brien narrowly beating Jack Bunyer for the coveted HGS prize for our rounds at Mijas (Los Lagos) and Rio Real. Mike’s success shows how far you can progress with golf by participating with HGS. He only started playing regularly three years ago, and is already amongst the prizes!

All in all, a very successful season, which will be celebrated at our Annual Dinner at National Liberal Club on Wednesday 18th January 2017. All Horners and their guests are welcome to attend, with tickets (priced at £52.50 per head) available from the event organiser, Colin Freedman.

The Horners Golf Society offers the opportunity for golfers of all standards to play throughout the season from Spring to Autumn at a range of courses across the South of England (even in Essex!). Please sign up by contacting the Hon Secretary, Colin Richards (colin.t.richards@btinternet.com).