Horners at the Inter-Livery Tennis 2017

It was a cool, largely cloudy day on Wednesday the 6th September 2017 when representatives of twelve different Livery companies gathered at the delightful Queen’s Club for the annual Inter-Livery tennis competition. Although it sadly wasn’t a beautiful, hot late summer day, it did thankfully remain dry, enabling the whole day to be played outdoors.

The Horners company fielded two pairs for this mixe 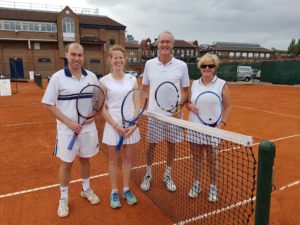 d doubles event. The first pair comprised of Clare Hunt, Liveryman, and Alex Jackson, and the second pair Trevor Hunt, Liveryman,and his wife Caroline. The standard certainly seems to have increased year on year and this year was no exception, with last year’s winners, the Salters, and many-time winners the Tallow Chandlers, both playing, as well as Clare who won for the Horners alongside her brother, Rob, in 2014.

Trevor and Caroline found themselves in a group with last year’s winners and the would-be champions this year so, despite close games and no disappointment or disgrace in the group stage, they finished third out offour and were not surprised to proceed into the Plate competition. They progressed swiftly through to the semi-final, beating the Feltmakers 2s and then Wax Chandlers en route. In the semi-final they played the Carmen 1s but, despite a veryclose game including two match points to rue, they unfortunately lost to the team who would go on to win the Plate Competition.

Clare and Alex did have a slightly kinder group and came through the pool stage with three wins, progressing into the Cup competition as winners of their group. Here they met and beat the Farmers 1s, meaning a match up in the semi-final against Clare’s apparent nemesis, the brother and sister Tallow Chandlers pairing who have won the competition on many occasions.  Despite a closely fought game, Clare and Alex were unable to stop them progressing onto yet another final, frustratingly losing 4-6. The final was however a great spectacle between the Cordwainer  1s and  Tallow Chandlers 1s, with the Cordwainer mother and son pairing coming out in front and a new nameto engrave on the beautiful Feltmaker’s Trophy.

The dry conditions facilitated another excellent display of fun mixed doubles tennis, brilliantly organised once again by the Feltmakers, and especially Bruce  Fraser .

We were delighted that our Master, Alison Gill, Clerk, JonathanMead, and Honorary Freeman Mary Hunt all attended as supporters. Drinks were had on the terrace where we were also joined by new Freeman Rebecca Joyce before the day was rounded off with a convivial dinner in the President’s room at the Queen’s Club, with prizes handed out by the Master Feltmaker.

The annual Inter-Livery tennis competition will be held again in September 2018: please get in touch with Mary Hunt, Honorary Freeman, if you are interested in playing.