On 5th March, 64 pairs competed in the Inter Livery Bridge Competition at Drapers Hall organised by the Makers of Playing cards. For eight years, Past Master Ray Anstis and his son Court Assistant David Anstis have represented the Horners and have come second twice. This year Ray and his wife Janet competed for the Horners. At the half way stage after 12 boards they were the leading pair but during the second half they were overtaken by the Makers of Playing Cards who won the event. Ray and Janet had to settle for a well deserved second prize. Here is a photo of them receiving their award. If any Liveryman or Freeman would like to compete next year, they should contact Ray as more than one pair are welcome to compete from each Livery. 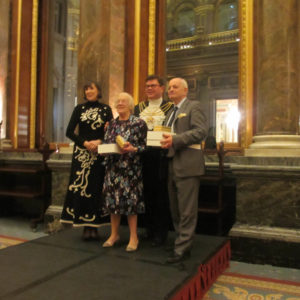