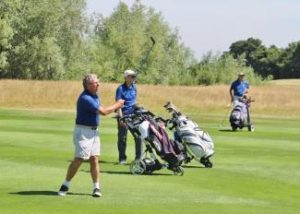 It’s 2.30PM on a glorious July afternoon, and the two Colins (Richards and Freedman) await the arrival of the Lord Mayor of London, our own Alderman Dr Andrew Parmley, on the steps of Burhill Golf Club in Surrey. The months of preparation are reaching their conclusion, and we have just successfully arranged the completion of a round of golf for 25 teams of four, comprised of teams representing 13 Livery Companies (including 2 from the Horners’). Three Past Master Associations, two from the City Livery Club, five put together by friends of the organisers, and a specially invited team from 27 SQN RAF made up the field.

The day started early, with arrival at the Club at 6.45am by the organising team comprising Colin Richards (Event Organiser), Colin Freedman (Competition Organiser), and our helpers for the day, Jack Bunyer’s daughters (Carley, Natalie and Kirsten), together with 2 members of Jack’s Company (Paul Crozier and Caroline Whelan), and Judith Price (wife of Liveryman Alan). Unfortunately, we were one missing, Andy Freedman, whose daughter provided a grandchild during the night! How were we going to replace Andy – a seemingly impossible task! Fortunately, as the men struggled with the task of registering 100 golfers, providing them with welcome packs. and enrolling them into various competitions, the ladies took over, and all tasks were completed successfully in time for the participants to enjoy a light breakfast, and tee-off at 9o’clock in a “Shotgun Start”.

Apart from for Paul, who was busy taking photographs of the participating teams on the course, we had a reasonably relaxed morning and prepared for the teams return. Whilst they enjoyed a Pimms reception, we tried to recover the Score Cards and work out the prize-winners; a task supposed to be carried out by the Burhill Professionals’ Shop, but seemingly beyond their limited capabilities, and Colin F had to quickly develop a recovery plan! Meanwhile, the ladies focussed on selling tickets for the various Raffle items on offer, selling commemorative tee-shirts and Horners’ umbrellas left over from the Lord Mayor’s Show (a difficult task with the temperature in the high 20s, before it was decided to reclassify them as parasols!).

The 4-course lunch was excellent, with members of the  Horners teams being deployed individually around the tables to act as hosts and ambassadors for the Company. This became necessary when, only a couple of days before the event, Burhill decided that they could only cope with the number for lunch by having tables of 9! As teams had four players, the Horners deployment allowed the teams to sit together. When all were seated, Adrian Waddingham, a former Sheriff, said Grace, and during lunch, Master Horner, Alison Gill, proposed a toast to the Lord Mayor and City of London, and at the end of the meal, the Lord Mayor rose to thank the participants for their support, and presented the prizes to the winning teams (1st Information Technologists and 2nd Chartered Accountants), and individuals (1st Men, David Robertson of the Information Technologists, and 1st Lady, Maggie Bradbury from the Horners). There were also prizes for the Runners-Up and Nearest-the-Pin prizes at all four Par 3 holes. Each prize included a commemorative scroll signed by the Lord Mayor and beautifully developed with the chirographic skills of Caroline Whelan.

During lunch Celia Bunyer drew the winning raffle tickets which were to be honoured at the end of the day, and the lady helpers circulated trying to persuade all present to participate in the Silent Auction, which had been running for about a week before the event. Pauliina Lytinnen, from the Guildhall based Lord Mayor’s Events Team, who had been our wise counsellor through the whole organisation period, was taking photographs that could later be viewed on the internet.

We were thankful to David Williams, formerly with the Royal Armouries, who used his contacts in the City and beyond, to develop a set of largely London based items for the Silent Auction, many of which were unique, such as the “Tour of Goldsmith’s Hall and the Assay Office” and “Lunch in Pinewood Studios in the Private Alfred Hitchcock Restaurant”. The success of the Silent Auction was the main factor in raising around £10,000 from the event.

It is nearly 6pm, and having counted the money taken on the day, we were able to relax with a quiet drink on the terrace of the Club. The feedback from both the Lord Mayor and the participants, was extremely complimentary, and great success was had in passing on the baton to another Livery Company to organise the event next year.