Home > The Company > The Craft of the Horner

The Craft of the Horner

The craft of the Horner was essential to medieval communities providing the utensils used in eating and drinking using the discarded horns of cattle and sheep as well as the antlers of deer.  In time, products included drinking horns, buckles, buttons, combs, necklaces, cutlery handles, snuff boxes, caskets, shoe horns and powder horns. In English churches of the 9th Century, patens and chalices were being made in horn. Flat sheets made from laminated horn  became used for windows and lamps (known as lanthorns or lanterns). Even after glass became commonplace, horn was still used for a while as a cheaper alternative.

True horn consists of stratified layers of keratose material which is chemically similar to fingernails and comes from cattle, rams, goats, buffalo, and other bovine animals. However, the antlers of deer which are often included in the Horner’s craft, are bone.

In the early days, horns were soaked for months to encourage the separation from the core. The presser cut off the horn tips and sawed the horns  into various lengths.  Each would be cut along its natural curve before being soaked in hot water. Then a constant movement over flame made the horn very malleable and using pincers, it was pulled open to spread nearly flat.  Finally, pressing flattened the horn into a leaf or pressed harder still, it became translucent. The leaves so produced would be converted into articles by the Horner or sold to other craftsmen at home or abroad.

There used to be  great demand for English horn from both at home and abroad . London was also once the world centre for the distribution of raw horn  from a number of Countries, including Africa and continental buyers came over on a regular basis.

Nowadays  cattle are being bred with reduced horns here in the UK which are not suitable for the craft. However if an animal is not bred that way, is fed well and  allowed to grow to full maturity, horn growth will be good.  Consequently, horn used today is generally imported from abroad, especially South Africa where these conditions still apply. The horns used are a bi-product of the meat industry, and the antlers are naturally shed by the deer each year. 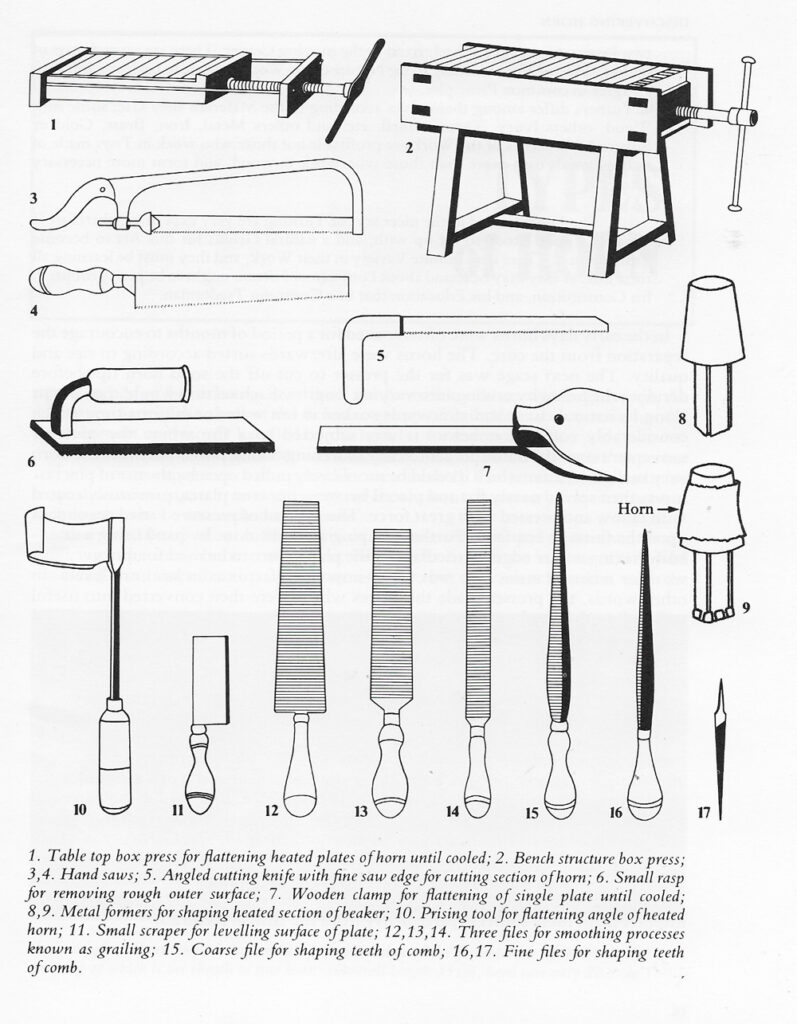 These images of tools used by the Horner by courtesy of Discovering Horn by Paula Hardwick.