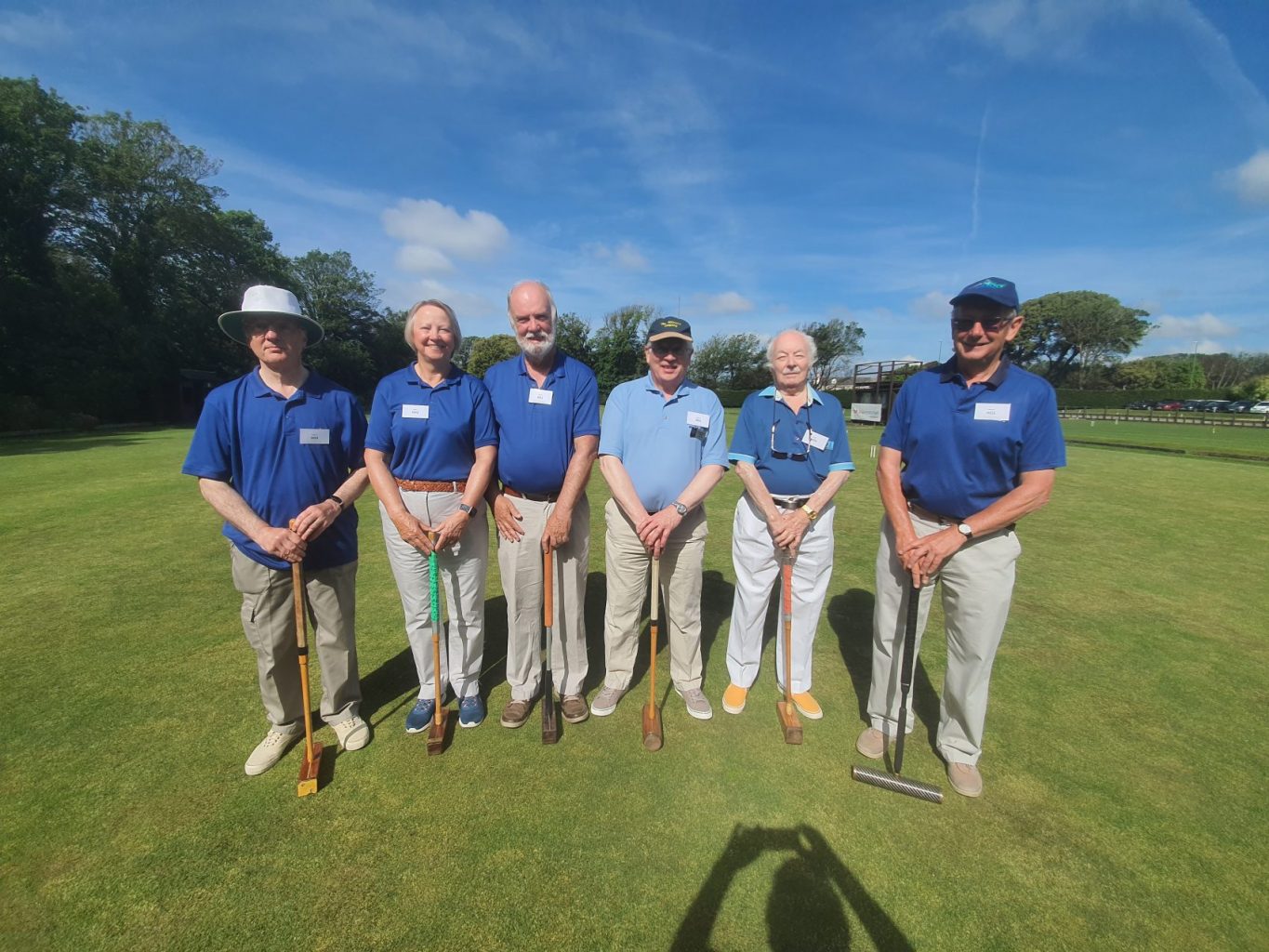 The relaxation of the Covid rules allowed this popular Glovers’ event to take place again on a sunny Sussex day at the Sussex County Croquet Club at Southwick. There has been a recent surge in people taking up croquet across the country which was evident in the demand for places at the tournament with 18 teams from twelve different livery companies taking part in a well run fun day. There was a long waiting list with the Horners fortunate to be able to enter three teams of elite players of two each consisting of Jonathan Mead, Maggie and Steve Bradbury, Denis Cruse, Peter Redway and Alan Price. We were also fortunate to have Margaret Redway with us as our inspirational coach, motivator, photographer and general manager.

We thought we should be paired together to make best use of the strengths and any minor weakness of individual players and so drew lots in the car park to see who would play with whom.

On arrival at the Club house we were greeted by the Glovers’ organiser, Paul Brown, who went through the Club’s Covid requirements and the running of the day with us including the fact that we would all have our individual tables outside for our meals and relaxation between matches. This was supplemented by various notices around the Club including about washing one’s balls etc., fortunately only at the end of the day and not between shots! The Master of the Glovers also greeted us and then it was down to the business of how the winning team was to be decided at the end of the day. We had five sessions of 45 minutes each with a complicated method of winning and losing teams after each session playing each other so that so that the winning team did not have an easy time.

We selected our mallets from those provided by the Club and after a quick catch up about the rules of the game and the hoop order for those who had become a little rusty we were sent off to find our lawn and opponents.

I have to say that by our standards the Horners results of the morning session were a little disappointing but we did have some convincing wins. We came up against some good club players who were able to “hoop” from considerable distances.

Our coach gave us some wise words at lunch time about focus etc. and after a good lunch with some of the team also resorting to alcohol to up their game we came back in the afternoon after each session to tell tales of our successes on the lawns. At the end of the day all three teams came in the middle of the pack with three wins, two wins and two ties and two wins and a tie. A very commendable performance.

After tea we had the speeches and prize giving. The excellent catering had all been done by volunteers including our own Judith Price who were suitably thanked and rewarded. The hospitable Master of the Glovers thanked everyone for coming and rather worryingly let slip that the Worship Company of Accountants players had to ask their opponents to keep the score! The top two teams both had four wins and a tie meaning that the final winner had to be decided on the aggregate number of hoops with just a difference of three between them. The winners rightly praised the standard of organisation and the great team effort by the Glovers and the Club to put on the event.

We all departed having had a most enjoyable day meeting up again in the sunshine, not just with fellow Horners but also with other Liverymen and supporters.